Edward Burne-Jones became a founding member of William Morris’s decorative art firm in 1861, where he produced countless designs and illustrations for books, tapestries, ceramic tiles, mosaics and stained glass. In 1862, he travelled to Italy where he was introduced to Botticelli, whose formal patterning profoundly influenced his subsequent development as a painter. His typical subject matter derived from medieval and classical legends charged with symbolism. In fact, he was pre-eminent in the Aesthetic movement in England and the Symbolist movement in Europe. A defining characteristic of Burne-Jones as an artist was his wilful blurring of the boundaries between his painting and his decorative work.

For more information on Burne-Jones, and for earlier works, see part 1 also.

This is part 2 of a 14-part series on the works of Edward Burne-Jones.

1861 The Annunciation and the Adoration of the Magi

This Triptych was originally commissioned for the Church of St Paul's, Brighton. It is one of the most important large-scale works from the early part of Burne-Jones's career. After it had been installed in St Paul's he decided that the central panel was too complicated and went on to paint a second version for the church. His handling of the Biblical story owes much to the paintings of the Italian Renaissance, particularly to nativity scenes by Fra Angelico and Tintoretto. He was also influenced by Rossetti, who was then working on a triptych for Llandaff Cathedral. Among those who modelled for the picture were William and Jane Morris, and the poet Algernon Charles Swinburne.

Burne-Jones's accounts for early 1862 list two designs for 'Theseus' tiles, of which this is the only one known, but may have been executed as early as 1861. It shows a four five-inch tile format for the narrative scene and a mediaeval-style interpretation of the subject matter, with Theseus dressed in a tunic of Late Gothic damask or brocade and the Minotaur peering, gargoyle-like, round the labyrinth wall. It derives not from ancient mythology, but from Chaucer's retelling of the Greek story in his 'Legend of Good Women', which explains its medieval character.

Burne-Jones had a 'passionate sympathy' for Sir Walter Scott's collection of romantic ballads, 'The Minstrelsy of the Scottish Border'. One of the poems in the anthology was the source of this watercolour. The incident depicted comes at the end of the ballad of 'Clerk Saunders', when Margaret is visited by the spirit of her dead lover, the Clerk of the title, who has been murdered by her brothers. The flowing lines of the costumes are self-consciously mediaeval and may have been inspired by the clothes William Morris designed for his wife and other women of his and Burne-Jones's circle. 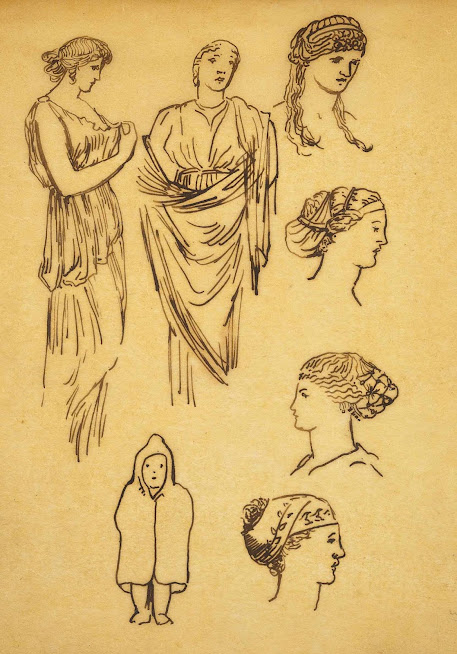 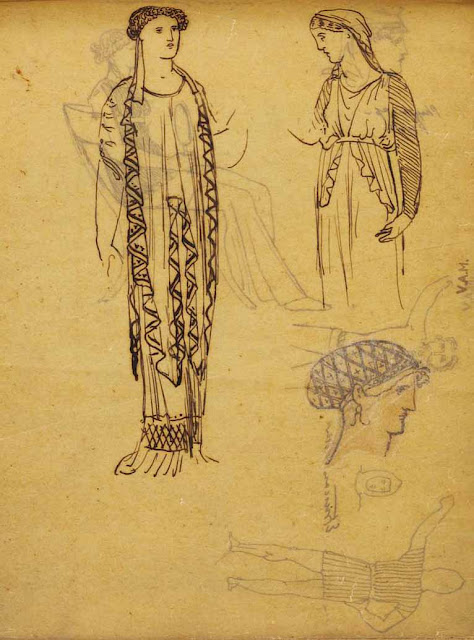 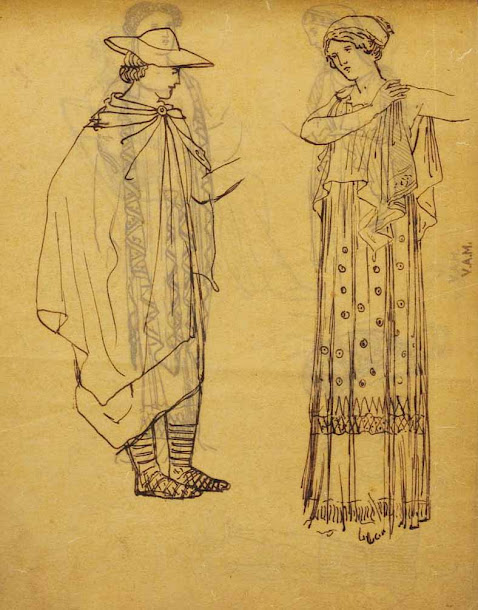 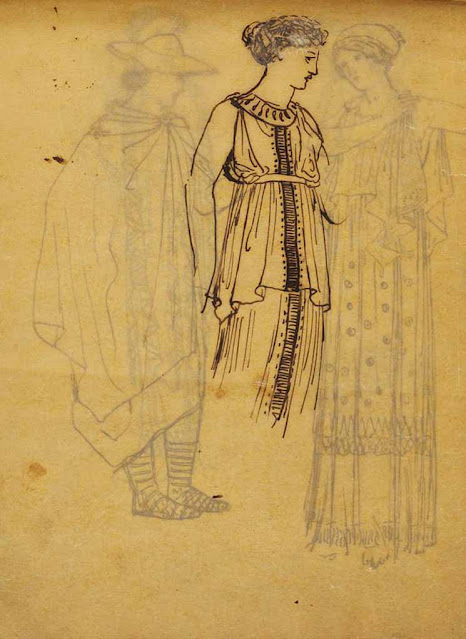 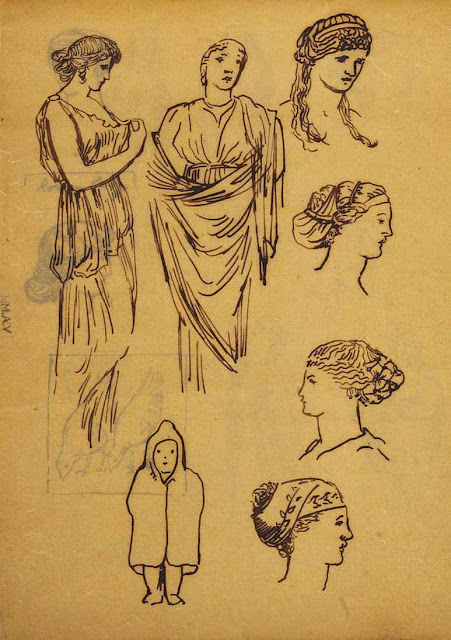 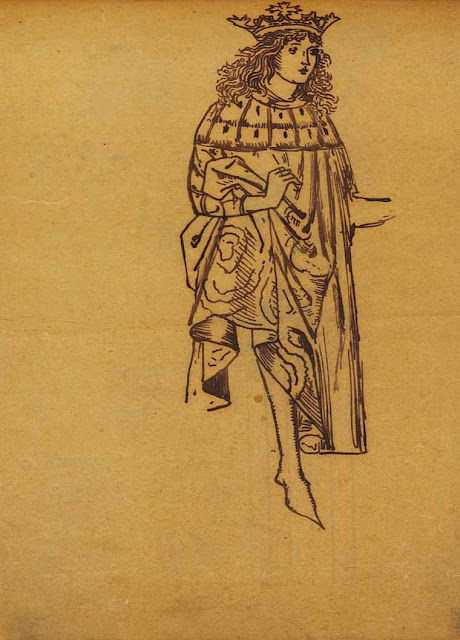 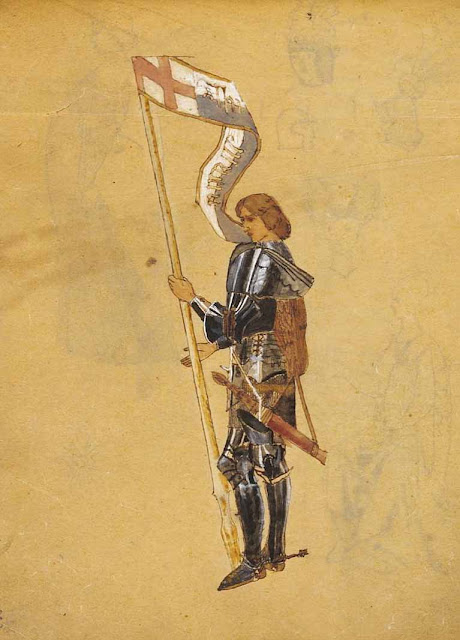 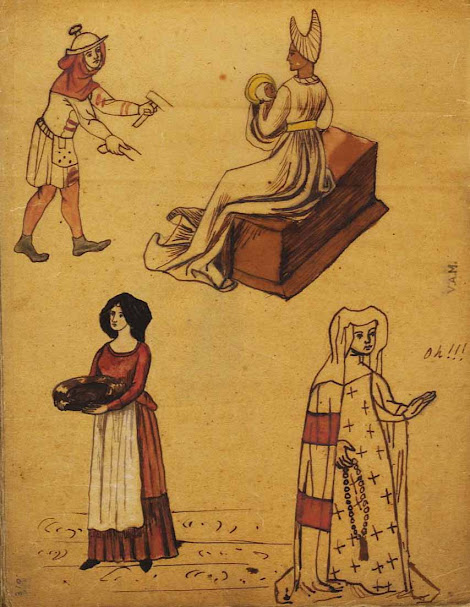 Made the year William Morris’s design firm was founded, this cabinet is one of the company’s earliest attempts to fine and applied arts. The architect Philip Webb devised the frame and Byrne-Jones ornamented the doors with a game-playing couple; a traditional metaphor for courtship.

When the piece was shown in the Mediaeval Court at the International Exhibition in London in 1862, critics disparaged the “crude” structure and colour, but praised the “beautifully painted” figures.

Note: I try to post three times a week whenever possible, usually Monday, Wednesday & Friday. I also put notice and a link on Twitter: @poulwebb
Posted by Poul Webb at 14:24 No comments: