To coincide with the opening of a major exhibition Amedeo Modigliani's work at Tate Modern, London, I am posting a comprehensive series on his work. 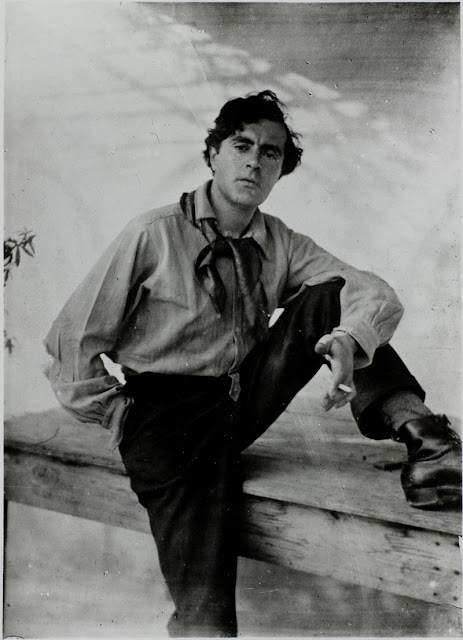 Amedeo Modigliani was born July 12, 1884, in Livorno, Italy. The serious illnesses he suffered during his childhood persisted throughout his life. At age 14, he began to study painting. He first experimented with sculpture during the summer of 1902 and the following year attended the Reale Istituto di Belle Arti in Venice. Early in 1906, Modigliani went to Paris, where he settled in Montmartre and attended the Académie Colarossi. His early work was influenced by Paul Cézanne, Paul Gauguin, Théophile Alexandre Steinlen, and Henri de Toulouse-Lautrec. In the fall of 1907, he met his first patron, Dr. Paul Alexandre, who purchased works from him before World War I. Modigliani exhibited in the Salon d’Automne in 1907 and 1912 and in the Salon des Indépendants in 1908, 1910, and 1911.

In 1909, Modigliani met Constantin Brancusi when both artists were living in Montparnasse. From 1909 to 1914, he concentrated on sculpture, but he also drew and painted to a certain extent. However, the majority of his paintings date from 1916 to 1919. Modigliani’s circle of friends first consisted of Max Jacob, Jacques Lipchitz, and the Portuguese painter Amadeo de Souza Cardoso; later, he associated with Tsugouharu Foujita, Moïse Kisling, Jules Pascin, the Sitwells, Chaim Soutine, and Maurice Utrillo. His dealers were Paul Guillaume (1914–16) and Leopold Zborowski (by 1917). The only solo show given the artist during his lifetime took place at the Galerie Berthe Weill in December 1917.

In March 1917, Modigliani met Jeanne Hébuterne, who became his companion and model. From March or April 1918 until May 31, 1919, they lived in the south of France, in both Nice and Cagnes. Modigliani died January 24, 1920, in Paris.
biography from Guggenheim Museum, New York

This is part 1 of a 9-part series on the works of Amedeo Modigliani:


Maude Abrantes. At the time there was gossip that Maude Abrantes was a married American woman who was having an affair with Modigliani. She apparently left France and returned to America pregnant:

Dr Paul Alexandre, Modigliani's first great patron and friend. From 1907 to 1914, the two saw each other almost every day - apart from the periods when Modigliani left Paris to visit his family in Italy. Alexandre bought most of his paintings and squirrelled away every drawing he could lay his hands on. He was a young medical doctor, three years older than Modigliani, and when war broke out he was immediately sent to the front. His demobilisation was delayed at the end of the war so he never saw Modigliani again:

Max Jacob (1876 – 1944) was a French poet, painter, writer and critic, After spending his childhood in Quimper, Brittany, France, he enrolled in the Paris Colonial School, which he left in 1897 for an artistic career. He was one of the first friends Pablo Picasso made in Paris. They met in the summer of 1901, and it was Jacob who helped the young artist learn French.
Later, on the Boulevard Voltaire, he shared a room with Picasso, who remained a lifelong friend. Jacob introduced him to Guillaume Apollinaire, who in turn introduced Picasso to Georges Braque. He would become close friends with Jean Cocteau, Jean Hugo, Christopher Wood and Amedeo Modigliani:


Léopold Zborowski (1889–1932) was a Polish poet, writer and art dealer. He was born in Zalishchyky into a Jewish family. Zborowski and his wife Anna (Hanka Zborowska) were contemporaries with Parisian artists such as Chaim Soutine, André Derain, and Modigliani.
Léopold Zborowski was Amedeo Modigliani's primary art dealer and friend during the artist's final years, organising his exhibitions and letting the artist use his house as an atelier. He also was the first art dealer of René Iché, Chaim Soutine, Maurice Utrillo, Émile Savitry, Marc Chagall, and André Derain: