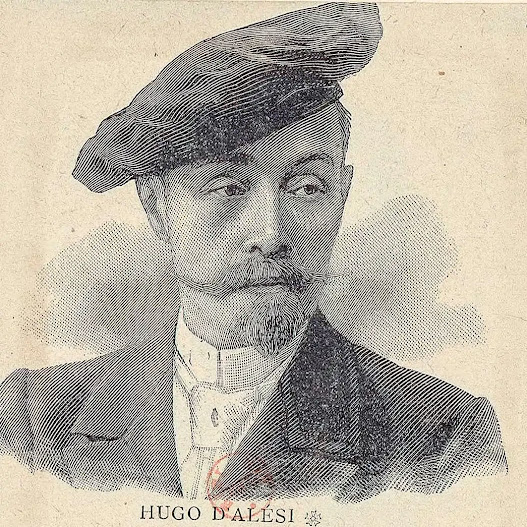 Romanian-born Frédéric Hugo d'Alési was one of the earliest artists to design posters for the French railway companies. They were printed using a process akin to chromolithography, called simile-aquarelle ("faux watercolour"), that required up to 20 different colours to render the final image, making them much more richly printed, detailed and painterly than the travel posters from subsequent decades. By some accounts, he designed "hundreds for the railway companies." It was such an expensive process that it drove the artist into bankruptcy shortly before his premature death. D'Alési's posters caught the eye of many in France and around the world, including Paul Cézanne, who commented, "I should like to do decorative landscapes like Hugo d'Alési, yes, with my small sensibility."

This is part 1 of 3 on the works of Frédéric Hugo d'Alési:

D’Alesi, who was one of the organisers of the exhibition “Centenary of Lithography,” offers an elegant timeline of the medium’s history, from the early black-and-white works of Nicholas-Toussaint Charlet to the contemporary, colourful designs of Jules Chéret. This is the original maquette for the poster, which “represents the ambiguities that were inherent in the evolving status of the contemporary middle-class woman, who may visit galleries and even collect prints yet also knows that she herself is looked at and therefore orchestrates her appearance and gestures.

Edward William Cooke (1811–1880) was an English landscape and marine painter. He was born in London, the son of well-known line engraver George Cooke; his uncle, William Bernard Cooke (1778–1855), was also a line engraver of note, and Edward was raised in the company of artists. He was a precocious draughtsman and a skilled engraver from an early age, displayed an equal preference for marine subjects and published his "Shipping and Craft" when he was 18, in 1829. Cooke began painting in oils in 1833 and first exhibited at the Royal Academy and British Institution in 1835.

He went on to travel and paint with great industry at home and abroad, indulging his love of the 17th-century Dutch marine artists with a visit to the Netherlands in 1837. He returned regularly over the next 23 years, studying the effects of the coastal landscape and light, as well as the works of the country’s Old Masters, resulting in highly successful paintings. He went on to travel in Scandinavia, Spain, North Africa and, above all, to Venice. In 1858, he was elected into the National Academy of Design as an Honorary Academician.

He also had serious natural history and geological interests, being a Fellow of the Linnean Society, Fellow of the Geological Society and Fellow of the Zoological Society, and of the Society of Antiquaries. In the 1840s he helped his friend, the horticulturist James Bateman to fit out and design the gardens at Biddulph Grange in Staffordshire, in particular the orchids and rhododendrons. His geological interests in particular led to his election as Fellow of the Royal Society in 1863 and he became a Royal Academician the following year. In 1842 John Edward Gray named a species of boa, Corals cookii, in Cooke's honour.

This is part 11 of 11 on the works of Edward William Cooke.

Note: Details were not found for the remainder of these images: