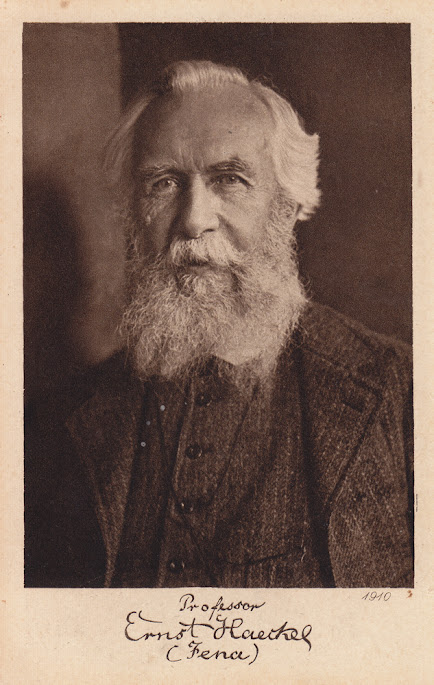 Ernst Heinrich Haekel (1834-1919), a German physician, biologist and nature philosopher. Guided by his father into the practice of medicine, he soon forsook this early career to follow a path more to his liking. In 1862 he began his academic career as a biologist and professor of zoology at the University in Jena where he taught and conducted research until 1909.

During his tenure at Jena, he devoted time to traveling as a field naturalist, collecting specimens along the way. He is noted for his discovery of radiolarian, a type of amoeboid protozoa that produces intricate mineral skeletons found as plankton throughout the ocean. These oceanic organisms are reflected in diverse forms that are strikingly beautiful, almost like the snowflakes of the sea. Notably, he also coined the terms “phylum” and “ecology.”

Haekel's academic and literary output was enormous, and by the time he was 60, he had produced 42 works of over 13,000 pages, including numerous scientific memoirs.
He was a flamboyant & controversial character who espoused Lamarckian rather than Darwinian concepts, though he did contribute to the popularisation of Darwin’s work in Germany. Something of a maverick in the scientific world, many of his drawings are closer to art than reality, as he was not above inventing creatures to substantiate his theories.

This is part 3 of a 3 part series on the works of Ernst Haeckel.