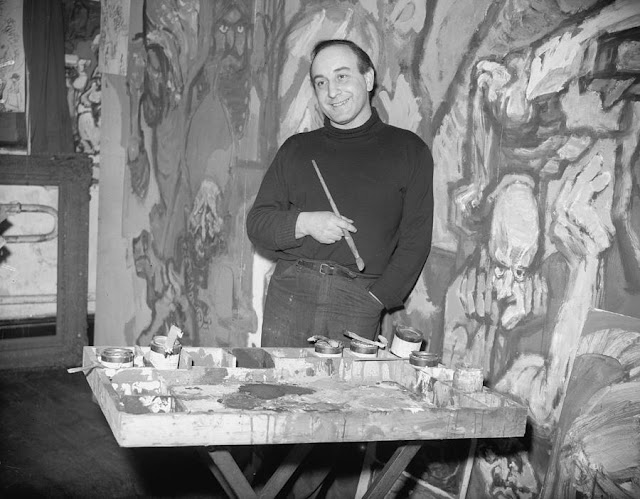 Feliks Topolski was born in Warsaw, Poland in1907, the only child of the actor- manager, Edward Topolski. From an early age, he witnessed many of the country’s turbulent political events, and depicted them in some of his first drawings, his artistic talent being nurtured by his mother. Educated at Mikołaj Rey School (until 1925), he studied under Tadeus Pruszkowski, first privately and then at the Warsaw Academy of Fine Art (1927-32); particularly significant to his development was the summer school that Pruszkowski ran at Kazimierz. He also served as a cadet at the Artillery Officers’ School, receiving a commission as a second lieutenant in the Artillery Reserve (the influence of his mother’s second marriage to an army officer). While still a student, he began to contribute cartoons to the Cyrulik Warszawski (The Polish Barber), and then gradually to other periodicals. A series of journeys across Europe, to Italy, France and other countries – that began in 1933 – informed both his political awareness and artistic skills.

In 1935, Topolski received a commission from Waidomosć i Literackie (Literary News) to go to Britain to record King George V’s Silver Jubilee. Attracted by what he considered the country’s ‘exoticism’, he settled in London, and associated with a group of writers that included Graham Greene. He contributed illustrations to Night and Day, the short-lived magazine co-edited by Greene, and the newspaper, the News Chronicle. Drawings made for the latter were collected in The London Spectacle (1935) [388 & 389], described in the introduction by D-B Wyndham Lewis as ‘his first series of English impressions’. George Bernard Shaw became a particular admirer of Topolski’s work, calling him ‘perhaps the greatest of all impressionists in black and white’, and asking him to illustrate three of his plays: Geneva, In Good King Charles’s Golden Days (both 1939), and Pygmalion (1941). His Portrait of GBS would be published in 1946.

Following the outbreak of the Second World War, in 1939, Topolski remained in London. While nominally serving as an officer in the Polish army, he became official war artist to the Polish government in exile and then also an official war artist for the British. In this latter capacity, he recorded bombed London streets during the Battle of Britain and the Blitz, in May 1941, receiving serious wounds and spending six weeks in hospital. His work resulted in the book, Britain in Peace and War (1941) [391]. In August of the same year, he received a commission from Picture Post to travel to Russia as a member of the first allied Arctic convoy to Russia, arriving in Moscow as the German army advanced towards the city. Russia in War was published in 1942. Further travels took in Egypt and the Levant, and India, Burma and China. In the final year of the war, he accompanied the Polish 2nd Corps in the advance up the Adriatic coast, and other Polish forces in the Low Countries. He was in Bergen-Belsen concentration camp two weeks after its liberation in April 1945, and later worked as an official war artist at the Nuremberg Trials. The record of these years appeared as Three Continents 1944-45 (1946).

While becoming a British subject in 1947, Topolski continued to survey and travel the world. In 1948, he attended both the Congress of Europe in The Hague (for Vogue) and the International Congress of Intellectuals for Peace in Wroclaw, Poland, and, as a result, produced Confessions of a Congress Delegate (1949). However, the return to his war-ravaged homeland had proved particularly painful. From 1949 into 1950, he made an extended tour that took in India, Burma, Indochina, Macao, Singapore, Japan and the United States, during which he was often treated like a foreign dignitary, so gaining access to people and places withheld from foreign journalists.

Topolski’s talents enabled him to develop his drawings into large-scale paintings without any loss of immediacy or passion. This is exemplified by The Cavalcade of the Commonwealth, a commission for the Festival of Britain of 1951, which Topolski based on drawings that he made on his recent tour. Similarly, he returned to the drawings that he made during the Coronation of Elizabeth II, on 2 June 1953, to fulfil a commission from the Duke of Edinburgh, in 1958, to produce a mural that still hangs in Buckingham Palace.

During the Festival of Britain, The Cavalcade of the Commonwealth was displayed in an open arch of Hungerford Bridge, on London’s South Bank. Soon after, Topolski moved his studio to an arch of Hungerford Bridge, and there, in 1953, began Topolski’s Chronicle, a fortnightly visual record of events that, printed on rough brown paper, emulated broadsheets of the eighteenth and nineteenth centuries. He considered that he gave ‘to it most of my energies in the following twenty/thirty years’ (Fourteen Letters, London; Faber and Faber, 1988, [unpaginated]). It also provided the raw material for other projects, including portraits and, ultimately, his Memoir of the Century, a panoramic series of murals begun in 1975 and continued until his death, also housed in the arches of Hungerford Bridge. (It is now open to the public, for tours by appointment, as Topolski Century.)

As a portraitist, Topolski worked on the title sequences of the pioneering BBC television series, Face to Face (1959-62) [394 & 395], providing likenesses of the 33 iconic interviewees, from Augustus John to Adam Faith. (An accompanying book, with Topolski’s images, was published in 1964.) Among other commissions, he received one from The University of Texas at Austin for – what turned out to be – an astonishing set of 20 portraits of ‘Britain’s Twentieth-Century Literary Greats’ (1961-62) that included E M Forster, Aldous Huxley and Evelyn Waugh [396-398].

However, Topolski worked with such energy and speed that he was still able to travel widely, recording key events and institutions, including Pope Paul VI’s visit to the Holy Land (1964), the start of Mao’s Cultural Revolution in China (1966) [393] and the workings of the United Nations in New York, the Democratic Convention riots in Chicago and a gathering of members of the Black Panther Party in San Francisco (1968). In 1969, the American television network, CBS, commissioned him to visit Moscow to record the May Day Parade, the resulting programme, based on his drawings, being shown in the United States over the Christmas. Further films followed, the last being South American Sketchbook, made with his son Daniel, for BBC television, in 1982. His final book, the idiosyncratic autobiography, Fourteen Letters, appeared in 1988.

Honours included the Gold Medal of the International Fine Arts Council (1955), a honorary doctorate from the Jagiellonian University of Cracow (1974) and election as a Royal Academician (1989)’

This is part 1 of a 4 - part series on the works of Felix Topolski:

All images © The estate of Feliks Topolski

Topolski was already well known in Warsaw, both as a painter and for his acutely observed pen and ink drawings, when he decided to widen his field with a European tour in 1933. Paris provided him with wonderful subject matter, to which he was to return for the project Paris Lost, however, he decided, having been contributing drawings to Vogue, Harper’s Bazaar and the News Chronicle since March 1935 that his first foreign publication would take the British Capital, scene of George V’s Jubilee, as its subject; The London Spectacle.

Topolski’s spoken English was as yet halting, however, his eye and pen sped to the heart of the subject. He went all over London. The entrenched class system played right into his hands. No-one escaped! As the critic Dominic Wyndham Lewis pointed out in his Preface ‘The majority of British Cartoonists play for safety and concentrate on those exquisite creatures … the Sheppard young man and the Lewis Baumer girl … whom editors prefer … ’. Not so Topolski. In common with Rowlandson, Daumier and Keene he relished those typical and yet grotesque markers of any heterogeneous society. The success of The London Spectacle, for which some of these drawings are studies and to which all of them are related, helped decide his choice of London as his new home.

That any of the many pen and ink studies made by Topolski on his visits to Paris between 1935 and the War survive is remarkable. On his departure for War Artist duties he entrusted his London studio, with its large glass windows, to the care of his future wife, Marion Everall. Fortunately for her, and the contents, bombs did not fall on the building. As the original, on-the-spot sketches for those subjects worked up for intended publication in 1939 as ‘Paris Scenes and Secrets’ they were largely forgotten. The selected drawings were stolen from the Warsaw publisher by the Nazis in September 1939, lost during the War and only returned to the artist in 1963. Their eventual publication in 1973, at the height of Topolski’s fame, attracted much attention.

It was during his first tour of Europe in 1933 that Topolski began to chronicle his times. Those who saw his drawings immediately recognised the continuation of a venerable tradition: acute and satirical they were both specific and typological. Rowlandson, Daumier and Lautrec captured and defined their worlds thus. The success ‘The London Spectacle’ in 1935 persuaded him to settle in England but he travelled continually.