Part 1 of these posts (see previous post below) on the work of Robert Indiana looks at his iconic LOVE series. Today I am taking a look at his graphical works.

Robert Indiana, an American painter, sculptor and graphic artist was born Robert Clark in New Castle, Indiana in 1928. He graduated from Arsenal Technical High School, Indianapolis in 1942 and had his first one-man show of watercolours – works that bear the influence of Reginald Marsh, Edward Hopper and Charles Sheeler.

In 1945 he attended Saturday classes at the John Herron Art Institute, studying under Edwin Fulwinder. Though he received a scholarship to this institution in 1946, he entered the Army Air Corps instead. While serving in the Army he attended classes at Syracuse University and studied under Oscar Weissbuch at the Munson-Williams-Proctor Institute.
From 1949 to 1953 he attended the School of the Art Institute, Chicago. He then completed his BFA requirements at the university of Edinburgh while on a travel fellowship, and later moved to New York
.
In the mid 1950s he was living near Ellsworth Kelly, Jack Youngerman, James Rosenquist, Charles Hinnman and other artists on Coenties Slip in New York. It was at this time that he began doing hard-edged paintings; the first ones based on the doubled form of the ginkgo leaf, a motif that continued for several years. In the early 1960s he did his first constructions of junk wood and weathered iron. These works, at first severely geometric, combine metal and wood with gesso.


In the early 1960s several of his works were purchased by major museums and collectors and his pieces were included in many exhibitions, including his first one-man show in 1962 at the Stable Gallery, New York.

In 1964 he collaborated with Andy Warhol on the film EAT and in the same year received his first public commission, a work for the exterior of the New York State Pavilion at the New York World's Fair – a 20-foot EAT Sign. 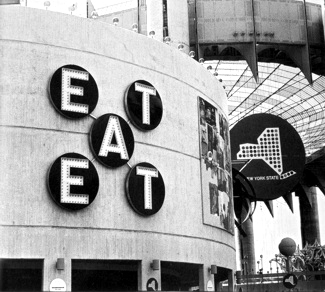 In 1967 he exhibited one of his few figurative works, Mother and Father (1963-67, collection of the artist), at the Ninth Sao Paulo Bienal, Brazil. He was represented at Documents IV, Kassel, Germany by some fifteen pieces and did a serigraph, Die Deutsche Vier, for this exhibition.


Indiana's work evolved into hard-edged graphic images of words, logos and typographic forms, earning him a reputation as one of America’s leading contemporary artists.

Indiana was a great fan of the work of artist Charles Demuth, and did several works based on Demuth's series "The Figure Five in Gold" carried out between 1924 and 1929: