The Belle Époque (the Beautiful Period) in France is conventionally dated from the end of the Franco-Prussian War in 1871 to the the outbreak of World War I in 1914. It was a period characterised by optimism, regional peace and economic prosperity, and of technological, scientific, and cultural innovation. Whilst showing key works from the Belle Epoque, I am including works from the fall-out of the period almost up to World War II, so as to put these works in context.

Artists in the late 1800s found opportunities to present their work to the masses through advertising art that began to appear as billboards and posters, plastering the streets of Paris. “Affiche Artistique” was the term that the French used to describe a poster that contained artistic expression.  The art was so impressive to the public, people began to collect the posters as soon as they went up, which is why they are so scarce today.

Artists such as Henri de Toulouse-Lautrec, Jules Chéret, Théophile-Alexandre Steinlen, and Alfred Choubrac, contributed to the creative body of work that became what some called  “a free museum for the masses”.  The craze for collecting these examples of modern art was even given the name, "affichomanie", meaning “artistic poster mania”.  Collectors today pay hundreds, if not thousands for original prints of these rare posters.

This is part 8 of a 9-part series on art of the Belle Epoque. For more works in the series see parts 1 - 7 also. 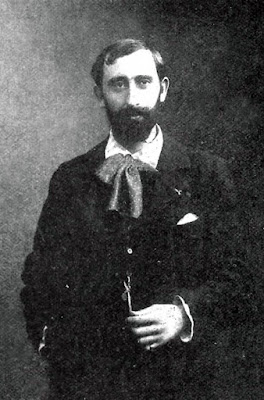 Jules-Alexandre Grün was a post-impressionist painter, illustrator and poster artist.  Born in Paris, Grün studied under Jean-Baptiste Lavastre, the theatrical director of the Paris Opera, and Antoine Guillemet, the noted landscape painter.  Grün was especially fond of painting scenes of Bohemian lifestyle.  He worked at the Chaix Printing Company where Jules Chéret was his art director.  Grün’s best known painting titled “The Dinner Party” was completed in 1911.

Lucien Métivet was a French poster artist, cartoonist, illustrator, and author who achieved notoriety during the Belle Epoque. Best known for his 1893 poster of the chanteuse Eugénie Buffet, he was also a popular cover artist for the Parisian humour magazine "Le Rire" and a frequent contributor of cartoons and illustrations to it and other magazines. He illustrated books by a number of prominent authors of the time and wrote at least two books of his own.

Théophile Steinlein was born in Lausanne and studied at the University of Lausanne before becoming a trainee designer at a textile mill in Mulhouse, France. In his early twenties he and his new wife were encouraged by painter François Bocion to move to the artistic community in Montmartre, Paris.

Once there, Steinlein was befriended by the painter Adolphe Willette, who introduced him to the artistic crowd at 'The Black Cat' (Le Chat Noir). This led to commissions for posters from Aristide Bruant, the cabaret owner and entertainer.