This is part 19 of a 28-part series on the works of Marc Chagall:

In 1959, Dr. Mariam Freund (National President of the Hadassah) and Joseph Neufeld (architect who designed the Hadassah-Hebrew University Medical Center) commissioned Marc Chagall to design the stained-glass windows for the synagogue that was to be part of the medical center. Each of the twelve windows would represent one of the twelve tribes of Israel. Chagall worked on the project for two years, with the windows ultimately exhibited in Paris in June of 1961 and at the Museum of Modern Art New York in the winter of 1961. In February 1962, they were permanently installed in the synagogue. Chagall created the lithographic series The Twelve Maquettes for the Stained Glass Windows for Jerusalem after the image of these original stained glass windows. 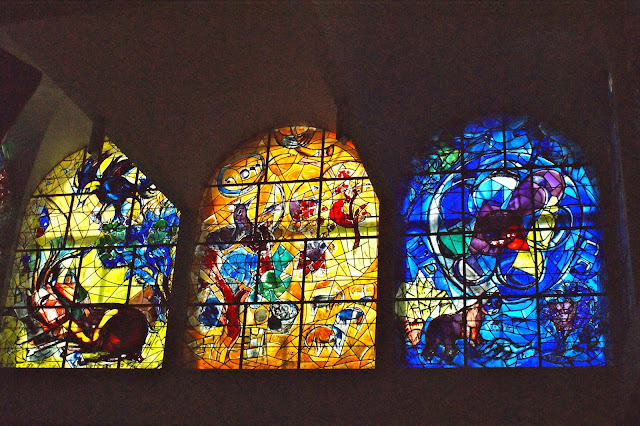 1962 Set of 12 lithographs of The Twelve Tribes designs:


These two sets of lithographs date from 1962 - In each case I have shown what I believe was a more sketchy version of a second more (finished) set:

The Chagall state hall is used for state receptions. The hall was designed and decorated by the Jewish artist Marc Chagall (1887-1985). Chagall designed for the hall 12 floor mosaics, one wall mosaic and three Gobelin tapestries.

Speaker of the Knesset Kadish Luz called on March Chagall in 1960 and requested that he provide the artwork the future permanent Knesset building. It was first discussed that he create murals or works of stained glass, as he had created for the synagogue at the Hadassah Hospital. Chagall, however, wished to attempt to create tapestries. Kadish Luz provided him with passages from the Bible, and Chagall worked them into his drawings. In December 1963 he suggested to make the Gobelins as a triptych – three paintings of the same theme, hanging side-by-side and comprising a whole.

Chagall made the original paintings the same size of the future tapestries. The painting for the right tapestry was completed at the end of 1963, since he had made a similar painting – in different colors – for a stained glass window he made for the United Nations building in memory of the late Secretary General Dag Hammarskjöld.

The paintings for the centre and left tapestries were completed in the summer of 1964. It was then that the weaving of the tapestries began, at the “Atelier de la Manufacture des Gobelins” workshop in Paris. Prior to the work on the tapestries themselves, the workshop attempted weaving portions of the carpets for a year and selected 144 colours and shades to be used in their making. The weaving began in 1965 and continued until early 1968. 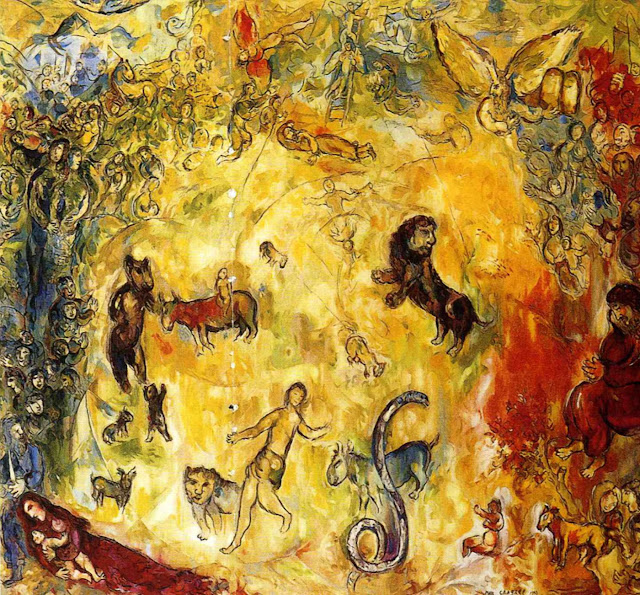