Continuing a major series on American Folk Art featuring 21 postings. Folk Art encompasses art produced by artists and ordinary folk with little or no training in the arts, and is traditionally utilitarian and decorative rather than purely aesthetic. The period I’m covering is the C18th and C19th.
See parts 1-17 also for earlier works. 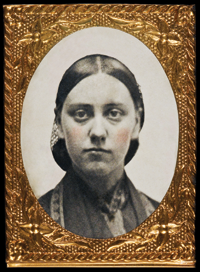 Few women during the early nineteenth century practiced as professional artists, yet many were engaged in artistic activities they had begun as schoolgirls. A number of portraits by Ruby Devol Finch have been known for some years, including portraits of friends and neighbours in the community of Westport and Westport Point, Massachusetts. Finch was active between 1830c and 1843.

Ruth Henshaw Bascom, also known as Aunt Ruth, was an American folk artist who produced over 1,400 portraits. She was the daughter of Colonel William Henshaw and Phebe Swan of Leicester, Massachusetts, and a schoolteacher from 1791 to 1801. Bascom married first, at about 32 years of age, to Dr. Asa Miles, but he died a year or more after their marriage. She married a second time for about 35 years to Reverend Ezekial Lysander Bascom. Bascom didn't give birth to children of her own, but she had a stepson from her first marriage, stepdaughter from her second marriage, and a niece and nephew that she raised. She documented the daily activities of her life in diaries beginning at the age of 17, which included records of the portraits that she made.

While married Bascom fulfilled the role of a minister's wife, was a teacher, and was active at the local library and in temperance societies. She made her first portrait in 1801, but she did not begin creating portraits regularly until after 1818. Bascom worked with a variety of materials, including pastels, pencils, cut paper, and foil. Some of her initial works were layered pieces of paper that represented the head and neck, clothing, and accessories placed over a background. She also made pastel portraits on one sheet of paper in the latter part of her career.

Born in Buxton, Maine, 7 August 1801, the artist was probably named after the Smith family's physician, Dr. Royal Brewster. As the eleventh of fourteen children of John McCurdy and Elizabeth McLellan Smith, Royall successfully survived a childhood of limited financial means and some illness to become a successful artisan.
Between 1830 and 1837, Royall Brewster Smith executed some three dozen portraits of residents of southern Maine. As an itinerant, he painted subjects from such towns as Limington, Gorham, and Saco, all located within twenty-five miles of each other. Many of these sitters were from related families, some of them connected to Smith's own. There is no indication that Smith ever received formal training. Generally his works are three-quarter, half-length views on simple but brightly coloured backgrounds. The careful lettering of inscriptions on his paintings suggest that Smith may have worked as a sign painter as well as an artist.
In 1840 he married Roxana Gowen in the town of Gorham. By 1843 the couple had moved to Bangor, where Smith worked as a carpenter and painter until his death in December 1855.