Biography from the University of Connecticut:

James (Jim) Flora (1914-1998) was born in in Bellefontaine, Ohio. He attended Urbana University (1931-33), the Art Academy of Cincinnati (1934-30), and the Atelier 17 (two years). He co-founded The Little Man Press, a series of letterpress publications, with author Robert Lowry, and provided illustrations and designs for Little Man publications (1939-42). After graduating from the Art Academy, he began freelancing in Cincinnati. His clients included Proctor and Gamble and the Union Life Insurance Co.

Flora was hired by the art department of Columbia REcords in 1942, and established a reputation for his eccentric and amusing style of caricature, which appeared in Columbia's trade literature and ads. He became the label's art director in 1943, and was later promoted to advertising manager, and then sales promotion manager. He began designing album covers for Columbia around 1945. Around 1947 he began a series of idiosyncratically stylized, cartoonish covers, which are today considered some of the more dazzling exemplars of the early golden age of album cover design and dozens were reproduced in a book by Irwin Chusid, entitled The Mischievous Art of Jim Flora (Fantagraphics Books, 2004). 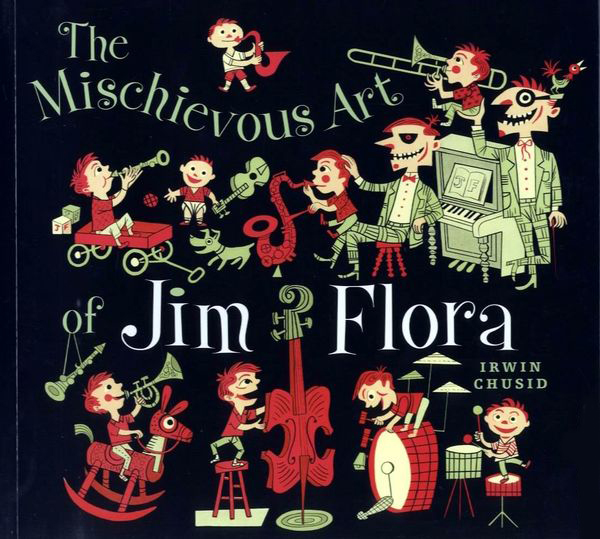 Flora left Columbia Records in 1950 and moved with his family to Mexico. They lived in the town of Taxco, which provided the inspiration and setting for Flora's first published children's book, The Fabulous Firework Family (1955). After returning from Mexico in 1951, Flora lived in Rowayton, Connecticut, and resumed his career as a freelance illustrator. He returned to album cover design in 1953, this time for RCA Victor, on a series of widely acclaimed assignments jobbed out by RCA art director Robert M. Jones (who had succeeded Flora as Columbia Records' art director in 1945).

The success of The Fabulous Firework Family convinced Flora to devote more time to writing and illustrating children's books. He eventually wrote and drew 17, both for Harcourt Brace and for Atheneum, between 1955 and 1982,. Several of these books were later adapted into animated features, for which Flora wrote the scripts. He was a boating enthusiast, and spent a good deal of time during the 1980s and 1990s painting nautical themes, including large, intricate steamship canvases. Jim Flora died in in 1998.

My thanks go to Irwin Chusid and the heirs of Jim Flora’s estate for allowing me to use these images. Here is Jim Flora’s official website containing lots more information and some merchandise: www.jimflora.com

This is part 1 of a 3-part post on the works of Jim Flora.

All images © The Heirs of James Flora, courtesy JimFlora.com