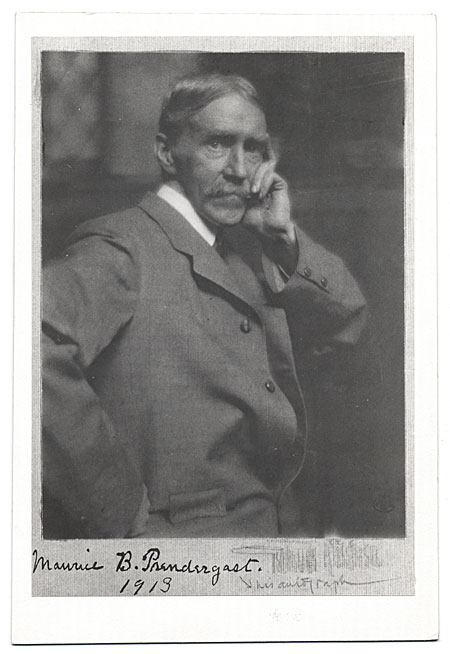 Maurice Brazil Prendergast (1858 – 1924) was born in Saint John's, Newfoundland, to a shopkeeper who moved the family to Boston in 1868. He left school after only eight or nine years and went to work for a commercial art firm. He never married and throughout his life was accompanied and supported by his brother Charles, a gifted craftsman and artist in his own right.

According to Charles, Maurice always wanted to be an artist and spent every available moment sketching. In 1892, Maurice travelled to Paris, where he spent three years. Studying first under Gustave Courtois at the Atelier Colorossi, he eventually moved on to the Académie Julian. There he met the Canadian painter James Wilson Morrice, under whose influence he began executing pochades, small sketches on wood panels depicting elegantly dressed women and playful children at the seaside resorts of Dieppe and Saint-Malo. Back in Paris, he developed a sophisticated modern style inspired in large part by the postimpressionists, particularly Pierre Bonnard and Edouard Vuillard.

In 1895, home from abroad, Prendergast joined his brother in Winchester, Massachusetts. Working in watercolour, oil, and monotype, he continued to focus on men, women, and children at leisure, strolling in parks, on the beach, or travelling the city streets. In 1898 he went to Venice and returned a year later with a series of watercolours of the city. In 1900 the Macbeth Galleries in New York mounted an exhibition of his work.

In1907 he returned to France, where he was profoundly influenced by Cezanne and the Fauves. Integrating these new influences into his work, he painted more forceful works of art, with very bright colours and staccato brushstrokes. As one of "The Eight," he was sharply criticised for his more abstract and brightly coloured style.

Following another trip to Venice, in 1911-1912, he returned to New York to select works for and participate in the Armory Show of 1913. A year later he and Charles moved to New York. In 1915 he was given an exhibition at the Carroll Galleries. Although the critical reception was mixed. he was able to attract a number of important patrons.

During the final years of his career.he spent his summers sketching in New Engalns, and his winters painting in New York. In 1921 the Brummer Gallery in New York held a small retrospective exhibition of his work. By 1923 he was in frail health and died a year later at the age of 65.

This part 1 of a 7-part post on the works of Maurice Prendergast: