This is the first of a two-part post on the works of American artist Robert Indiana. This first part takes a look at his most famous iconographic piece - LOVE. The second part will have many more examples of Indiana's other works.
Robert Indiana was born Robert Clark in New Castle, Indiana. He moved to New York in 1954 and joined the pop art movement, using distinctive imagery drawing on commercial art approaches blended with existentialism, that gradually moved toward what Indiana calls "sculptural poems".

Indiana's work often consists of bold, simple, iconic images, especially numbers and short words like EAT and HUG. His best known image is the word LOVE in upper-case letters, arranged in a square with a tilted letter O. The iconography first appeared in a series of poems originally written in 1958, in which he stacked LO and VE on top of one another. 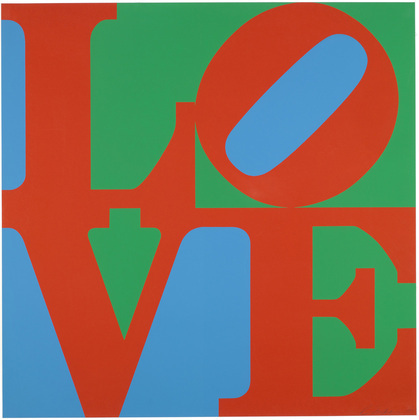 The first serigraph/silk screen of "Love" was printed as part of an exhibition poster for Stable Gallery in 1966. A few examples of the rare image, in bold blue and green with a red bottom announcing "Stable May 66" are known to exist. Twentyfive of these, without the red announcement, were signed and dated on the reverse by Indiana.

In 1973 it was featured on an eight-cent United States Postal Service postage stamp, the first of their regular series of "love stamps." The 330-million United States postal stamps issued in the 1970s are one of the more popular examples of the mass reproduction and appropriation of this image 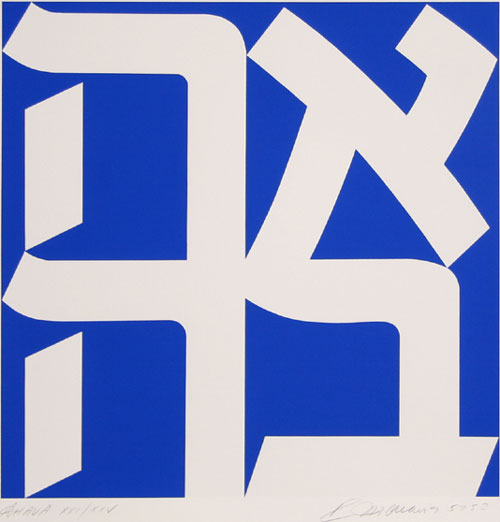 In 1995, Indiana created a 'Heliotherapy Love' series of 300 silk screen prints signed and numbered by the artist, which surrounds the iconic love image in a bright yellow border. These prints are the largest official printed version of the Love image.

In 2008 Indiana created an image similar to his iconic LOVE but this time showcasing the word "HOPE," and donated all proceeds from the sale of reproductions of his image to Democrat Barack Obama’s presidential campaign, raising in excess of $1,000,000. A stainless steel sculpture of HOPE was unveiled outside Denver's Pepsi Center during the 2008 Democratic National Convention. The Obama campaign sold T-shirts, pins, bumper stickers, posters, pins and other items adorned with HOPE. Editions of the sculpture have been released and sold internationally and the artist himself has called HOPE "Love's close relative".


For Valentine's Day 2011 Indiana created a similar variation on LOVE for Google, which was displayed in place of the search engine site's normal logo.


Here are some other versions of LOVE made over the years: