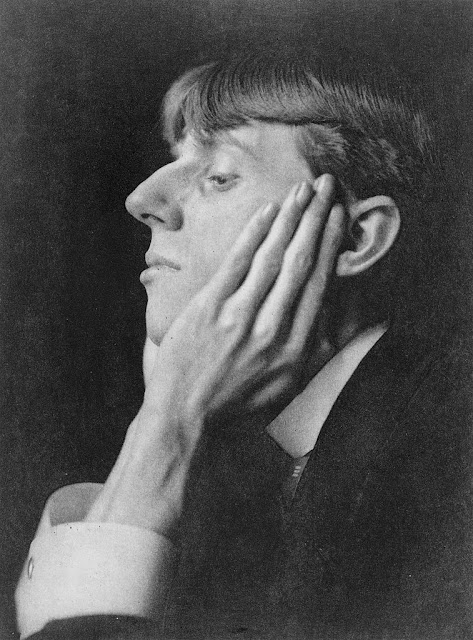 Aubrey Beardsley (1872 – 1898) was born in 1872 in Brighton, England. Beardsley’s health was always fragile - he had his first reported attack of tuberculosis at the age of nine - the disease which was to reduce him to an invalid several times and finally cause his death. When in 1884 his mother became too ill to care for him and his sister, they were both packed off to live with an aunt nearby. He attended Bristol Grammar School for four years as a boarder, indulging in his talents by drawing caricatures of his teachers. In 1889, he was sent to London as a clerk in an insurance office. His recovered mother soon followed and remained to nurse her son for the rest of his short life.

Beardsley's first published work was "The Valiant," a poem in the JUne 1885 issue of Past and Present, the Brighton Grammar School magazine. Two years later his first reproduced drawings, a series of sketches, "The Jubilee Cricket Analysis," appeared in the same journal.


He also provided the program book illustrations for "The Pay of the Pied Piper," his School's 1888 Christmas entertainment.


The years 1893-94 were perhaps the most important in Beardsley's career. He was hard at work producing illustrations and covers for books and periodicals, including his first commission, J. M. Dent's edition of Malory's Le Morte d’Arthur. This massive work, issued first in 12 parts and later in volume form, contained over 300 different illustrations, chapter headings, and vignettes. Also in 1893 the artist formed an alliance with the person who was to catapult him to fame and prove his downfall - Oscar Wilde.

From childhood Beardsley's life expectancy was short and uncertain. At the age of seven he contracted tuberculosis, a disease then known as "consumption" because sufferers appeared to waste away. Beardsley's fragile health meant that he was somewhat frail as a boy and often found himself confined to his bed, unable to attend school or play with his peers. The impact of this disease on the artist's childhood was no doubt on his mind when as an adult he created "Self-portrait in Bed" (1894). The ink drawing depicts a small child nearly swallowed up by the enormous bed that he occupies. An inscription in French at the top left reads: "By the gods not all monsters are in Africa." The quote is as much a reference to his lifelong struggle with tuberculosis as it is indicative of his fascination with the grotesque and macabre.

Beardsley worked briefly as a clerk for an insurance agency after grammar school, all the while developing a portfolio of Pre-Raphaelite-inspired drawings. In 1891, at age 19, Beardsley accompanied his sister to the studio of painter and illustrator Sir Edward Burne-Jones. Although the siblings were initially denied admittance, Burne-Jones's interest was piqued when he noticed Mabel's striking red hair. Beardsley soon built up the courage to show the artist his portfolio. Deeply impressed by the youth's obvious talent and imagination, Burne-Jones recommended Beardsley to the Westminster School of Art. There, Beardsley received instruction from painter Frederick Brown. A consumptive relapse shortly thereafter meant that from then on Beardsley lived on a knife's edge, relishing in a lust for life even as he faced the prospect of an early death.

Sir Edward Burne-Jones was not the only one to notice Beardsley. Within a year of enrolling in art school, the young artist received an offer from publisher Joseph Dent to illustrate Sir Thomas Malory's epic, Le Morte D'Arthur (1893). Impressed by the artist's ability, Dent also observed that Beardsley was "a strange boy" and probably "not long for this world." Despite his apparent frailty, Beardsley produced over 300 illustrations within a short time frame. The resulting work blends the classical poses and complex compositions found in Pre-Raphaelite art and the decorative patterning, flat two-dimensionality, and erotica of Japanese Ukiyo-ye prints with a Decadent fixation on death and decay.

This is part 1of a 7-part post on the works of Aubrey Beardsley:


Beardsley went to night classes at the Westminster School of Art under Professor Brown for three months in the summer of 1892. For Fred Brown, one of the founder-members of the New English Art Club. The style of the drawing shows the influence of Whistler, whose Peacock Room is imitated in the decoration of the wall. Beardsley acknowledged this influence by incorporating in the design a peacock feather and Whistler's ‘Butterfly’ signature.