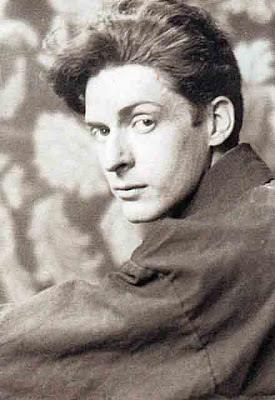 Edward McKnight Kauffer was one of Britain’s most highly influential 20th Century Poster Artists and Graphic Designers. Beginning his professional life as a painter, Kauffer soon embraced poster art as a form of visual communication, enabling the public to view Modern Art through the display of his posters on the streets.


In the early 1900s, Kauffer lived in San Francisco and worked as a bookseller whilst studying at Art School in the evenings. At the shop he sparked up a good friendship with a regular customer who expressed keen interest in his paintings. Joseph McKnight, a professor at Utah University, saw great promise in Kauffer’s work and in 1912 offered to sponsor him. McKnight loaned him enough money to travel to Paris to continue his studies at Académie Moderne. In respect, Kauffer dutifully adopted ‘McKnight’ as his middle name.

En-route to Paris, Kauffer got the opportunity to see the Armory Show in Chicago in March 1913. This show introduced America to everything of importance in European post-impressionist painting at the time: Duchamp, Cezanne, Picasso, Gauguin, Matisse, Van Gogh, and Kandinsky. It was so unlike any art America had previously seen. The show opened Kauffer's eyes to the European masters and undoubtedly, proved influential on his work throughout his life.

Before reaching Paris, Kauffer visited Munich. Here, he was introduced to Poster Art’s contribution to a city and the potential for it to be recognised as an art form by both art enthusiasts and the general public alike. For Kauffer, Ludwig Hohlwein’s (1874-1949) work was a clear example of this. His work adorned the streets of Munich and certainly helped initiate the use of typography within Kauffer’s paintings.

While studying in Paris, Kauffer was able to view works by many artists, and took an interest in the various styles and techniques on show. However his time there was cut short by the outbreak of WWI. Reluctant to return to America immediately, he travelled with his then wife, Grace Erhlich, to Britain, where Kauffer felt immediately at home.

Once in London friends introduced Kauffer to Frank Pick, Publicity Manager for London Underground Electric Railways. The relationship lasted for the extent of Kauffer’s career in Britain, with Kauffer producing a tremendous 140 posters for London Transport. In 1915 Pick commissioned four landscape posters; ‘Oxhey Woods’, ‘In Watford’, ‘Reigate; Route 60’ and ‘North Down’s.. Maintaining a very painterly style in these posters, it is possible to see influences of Van Gogh, most notably so in Oxhey Woods, and also of Japanese colour woodcuts in ‘In Watford’.

Kauffer rapidly developed from traditional poster art towards what is recognised today as graphic design. ‘Winter Sales are best reached by Underground’, 1922, is one of several remarkable posters Kauffer designed for Pick as part of a Winter Sales set between 1921-24. It revives his early influences from Vorticist and Japanese woodcuts, its abstracted forms of raincoats and umbrellas and its diagonal impression of wind and rain together create an intelligent and eye-catching pattern that would have equal rights if displayed at any reputable art gallery instead of on an Underground poster-hoarding.

By this point he was a well-known figure and finally thought of himself as a graphic artist rather than a painter. Kauffer regularly visited Paris, and through these visits, French book illustration, theatre, painting and poster design all began to influence his work. On a visit in 1923, Kauffer met Marion Dorn, an American Interior Designer, for whom he left his wife and daughter. His relationship with Marion was personal and professional, they collaborated on a number of projects including; interiors for friends’ offices, and most notably a range of rugs and the interior design, symbol, luggage label and brochure for the Orient Lines flagship modern ocean liner.

Kauffer’s jazzy-style was really coming into its own during the mid-twenties. Kauffer’s most widely seen poster, aside from those for London Transport is,Eno’s Fruit Salts, First Thing Every Morning (1924). Its bold, dynamic style and use of bright colours proved to be very successful. In addition to posters he designed many stage decorations for London theatre shows. Theatre’s influence is prominent in his posters for London Transport at the time. At the onset of WWII Kauffer reluctantly returned to New York.

This is part 1 of 3-part post on the works of E. McKnight Kauffer: