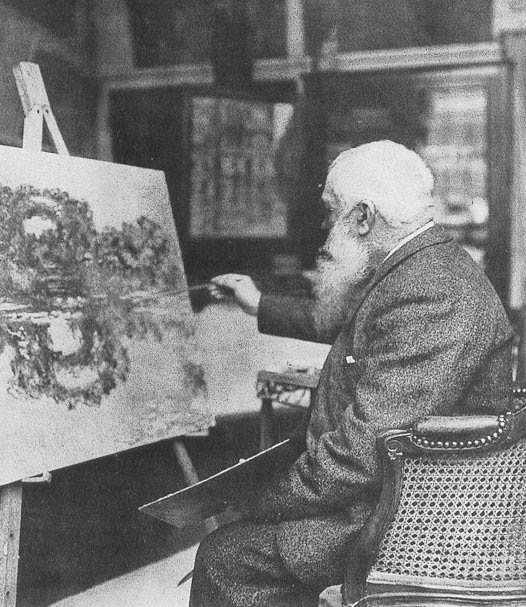 Claude Monet (1840 – 1926) was a founder of French impressionist painting, and the most consistent and prolific practitioner of the movement's philosophy of expressing one's perceptions before nature, especially as applied to plein-air landscape painting.
For full biographical notes on Monet see part 1. For earlier works by Monet see parts 1 - 19 also.
This is part 20 of a 27-part series on the works of Claude Monet:

The Rouen Cathedral paintings, more than thirty in all, were made in 1892 and 1893, then reworked in Monet’s studio in 1894. Monet rented spaces across the street from the cathedral, where he set up temporary studios for the purpose. In 1895, he selected what he considered to be the twenty best paintings from the series for display at his Paris dealer’s gallery, and of these he sold eight before the exhibition was over. Pissarro and Cézanne visited the exhibition and praised the series highly.

Historically, the series was well-timed. In the early 1890s, France was seeing a revival of interest in Catholicism and the subject was well received. Apart from its religious significance, Rouen Cathedral–built in the Gothic style–represented all that was best in French history and culture, being a style of architecture that was admired and adopted by many European countries during the Middle Ages.


When Monet painted the Rouen Cathedral series, he had long since been impressed with the way light imparts to a subject a distinctly different character at different times of the day and the year, and as atmospheric conditions change. For Monet, the effects of light on a subject became as important as the subject itself. His Series Paintings, in which he painted many views of the same subject under different lighting conditions, are an attempt to illustrate the importance of light in our perception of a subject at a given time and place.