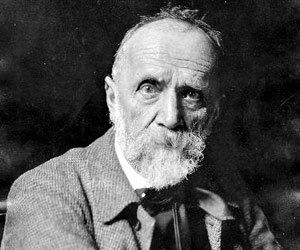 Albert Anker (1831–1910) is regarded as the “national painter” of Switzerland. His meticulous paintings of Swiss rural life endeared him to the public and during his heyday, he was regarded as the most popular artist. His works captured the daily and social life of the rustics in the picturesque villages of Switzerland. While these captured the imagination of the public, his portraits charmed the critics. Indeed, his portraits and still-lifes are what cemented his enduring legacy. Unlike many of his contemporaries, his documentation of the social life of villagers was never judgmental. Rather he portrayed them as plain and unpretentious. Anker also worked on many still-lives, which are considered to be among his most important works.

Albert Anker was born in 1831 to Samuel (a vet) and Marianne Anker. He was the second of the three children. When he was 11 years old, he visited an exhibition at the Societe des Amis des Arts, in Neuchatel, which kindled in him an early interest in art. He attended his early schooling from 1845 to 1848 and also took drawing lessons from Louis Wallinger. He then attended high school at the Gymnasium Kirchenfield in Bern in 1849 and graduated with a Matura two years later. Soon after graduation, he went to study theology and did the same after he moved to the University of Halle, Germany. In Germany, he had the opportunity to see the vast art collections, which inspired him so much that he decided to follow an artistic career. In 1854, he convinced his father to give him permission to do so.

In order to train himself as an artist, he moved to Paris in 1855, enrolled at the Ecole Nationale Superieure des Beaux-arts, and joined the studio of Charles Gleyre, the famous Swiss artist. He trained at the Institute for five years and during this time, he devoted himself in painting portraits. During this time, he participated in exhibitions in both Paris and Switzerland and later worked in a studio that he had set up in the attic of his parents’ house. He was a regular participant in the Paris Salon. In 1861, after completing his training at the institute, Anker visited Northern Italy and studied the works of masters like Titan and Corregio. In 1864, Anker married Anna Rufli and they had six children, two of whom died very early in life. Anker depicted his surviving children in some of his paintings. His painting, “Sleeping Child in the Forest” received a gold medal in 1966 at the Paris Salon.

Ten years later, he was made the Knight of the Legion d’honneur. He was also the foremost advocates for the construction of the Kunstmuseum in Bern when he was a member of the Great Council of Bern for a period of four years from 1870 to 1874. Anker travelled to many countries in Europe repeatedly, particularly Italy, Germany, France and Belgium and he liked to spend winters in Paris. Till 1890, he spent his summers at Anet, where he would devote his time painting his rural subjects. In 1891, he retired to Anet permanently and started working on illustrating the works of the Swiss novelist, Jeremias Gotthelf.
In 1889, he became a member of the Swiss Federal Art Commission for the first time and served there until 1893. After two years, he was again elected a member of the same organisation and served until 1898. He was also selected as a member of the Gottfried Keller Foundation and continued until 1901. Throughout his life, he remained a member of many international juries. In 1900, the University of Bern awarded him an honorary doctorate and the very next year, he suffered a stroke that significantly reduced his ability to work as his right hand was partially paralysed. He died in 1910 at the age of 79 at his house in Anet. After his death, an exhibition was dedicated to him, which was held at the Musee d’art et d’histoire in Neuchatel.
This is part 1 of a 5-part post on the works of Albert Anker: