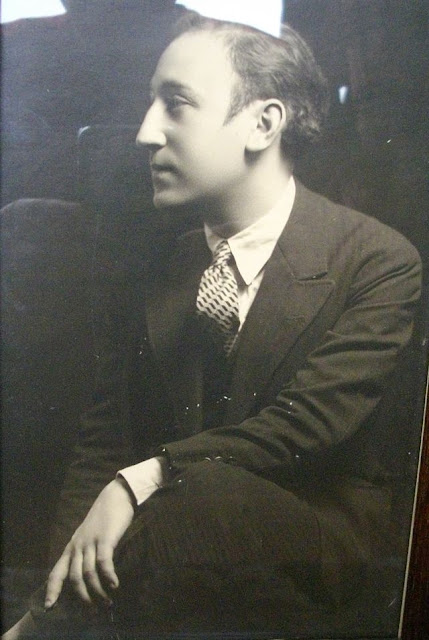 Charles Gesmar (born Geismar), simply known as Gesmar, was one of the greatest designers of costumes and posters during the golden age of the Paris music hall during the Jazz Age and was primarily renowned for his work for the great Parisian star Mistinguett. Although his tenure was short, his output was prolific and his creativity and talent unrivalled at the time.

Charles Geismar was born in Nancy in 1900 to a Jewish family. He attended the drawing School of Applied Arts of Auguste Vallin, and at the outbreak of the Great War, the Geismar family sought refuge in Paris. Here in early 1915, Charles met Mlle Andrée Spinelly, the famous actress-dancer who was enthusiastic about his work and asked him to design her costumes, previously created by the couturier Paul Poiret. Gesmar also designed for "L’Arciduc," a show at the Folies Bergere in October 1916 and provided illustrations for "La Baionette," "La Vie Parisienne," and "Fantasio" and "Le Rire."

Allegedly, effeminate and neurotic, one day in early 1917 in Spinelly’s house, he tried to shoot himself after an altercation with the actress but the bullet went into the lavatory cistern and flooded the house instead. Spinelly was not amused and their relationship ended. Mistinguett, often called the “Queen of the Paris Music Hall” was impressed by his unique talent and took him under her wing as her costume designer, describing him as "one of those gentle, ultra-sensitive lads, so feminine that you felt one harsh word would have shattered him." Over the next decade, although he designed mostly for Mistinguett, he was in great demand by all the main music halls in Paris.

Despite his unique relationship with Mistinguett, Gesmar created costumes and poster designs for most of the stars of the Paris Music Hall, including Barbette, Maurice Chevalier, the Dolly Sisters, Gilda Gray, Earl Leslie, Jane Marnac, and Mitty and Tillio, to name but a few.

In late 1923 Gesmar went to New York with Mistinguett, travelling aboard "Leviathan" from Cherbourg, arriving on the 26th November. He designed all the costumes for the Shubert revue "Innocent Eyes," starring Mistinguett, that was launched in Atlantic City in January 1924 followed by a regional run before opening at the Winter Garden Theatre in New York on 20th May 1924.

Gesmar’s costumes and graphics caused as much excitement at the time that was equal to the that shown a few years earlier by the elegance of Leon Bakst’s Ballets Russes. The seductive and sophisticated elegance of his art influenced generations of graphic designers and he was indisputably a bridge linking the works by other two great artists who worked for the Moulin Rouge, Toulouse-Lautrec (1864-1901) and René Gruau (1909-2004).
Gesmar allegedly died of pneumonia in February 1928, before his 28th birthday.
This is part 1 of a 2-part post on the works of Charles Gesmar: