Carlo Crivelli was probably born in Venice during the early 1430s. Both his father, Jacopo, and his brother, Vittore, were painters. Carlo is mentioned only once in Venetian documents: in 1457, already a master painter, he was fined and sentenced to six months in prison for abducting a sailor's wife.
Though trained in the late Gothic style of Antonio Vivarini, as his earliest works show, and familiar with the drawings of Jacopo Bellini, from which some of his mature compositions derive, Crivelli was profoundly influenced by early Renaissance art in Padua. There he studied works by Donatello, Fra Filippo Lippi, and the young Andrea Mantegna. He also probably joined the workshop of Francesco Squarcione sometime during the apprenticeship of the Dalmatian painter Giorgio Ciulinovich, called Schiavone, who arrived in 1456 and returned to Zara about 1461. So similar are the two young painters that Crivelli is presumed to have worked with Schiavone in Padua and followed him to Zara, where Crivelli was a resident and citizen by 1465.
By 1468, when he signed and dated an altarpiece in Massa Fermana, Crivelli had moved to the Marches, where an economic resurgence attracted trans-Adriatic immigration. After first living in Fermo, he became a resident of Ascoli Piceno by 1478. Crivelli flourished in this provincial area, where his allegiance to the elaborate compartmentalized polyptych and his superb skill with tempera and gold leaf appealed to the conservative taste of his patrons, and where he was free to develop his unique interpretation of Gothic and Renaissance themes without having to compete with the new Venetian style of Giovanni Bellini. Crivelli may have visited Ferrara about 1470, but from the mid-1470s, when his style had matured, through the 1480s, he resisted outside influences. In his late works, however, he drew inspiration from the altarpiece that Giovanni Bellini painted for Pesaro in the 1470s, and adopted the unified space of the new Renaissance type of altarpiece. The expressive figure style and brilliant, rich colors that distinguish Crivelli's art are remarkably consistent. His success spawned local imitators, including his brother Vittore, who was active in Fermo from 1481. Carlo was ultimately rewarded with a knighthood by Prince Ferdinand of Capua in 1490. He died in Ascoli in 1495.
Biography from The National Gallery of Art, Washington, DC


This is part 1 of a 3-part post on the works of Carlo Crivelli:

1468 The Altarpiece of Massa Fermana:

1470 Porto San Giorgio altarpiece:
Monumental altarpieces with multiple images (polytychs) were a staple of Cruvelli's painting practice. The Porto San Giorgio altarpiece stood over the high altar of the parish church in the Adriatic coastal town of Porto San Giorgio for over four hundred years.
Following demolition of the church in 1803, the altarpiece was sawn apart and its paintings dispersed to collections in Europe and the United States. Isabella Stewart Gardner purchased "Saint George in 1897, bringing the first Crivelli to America. The six surviving panels are assembled in the reconstruction below. 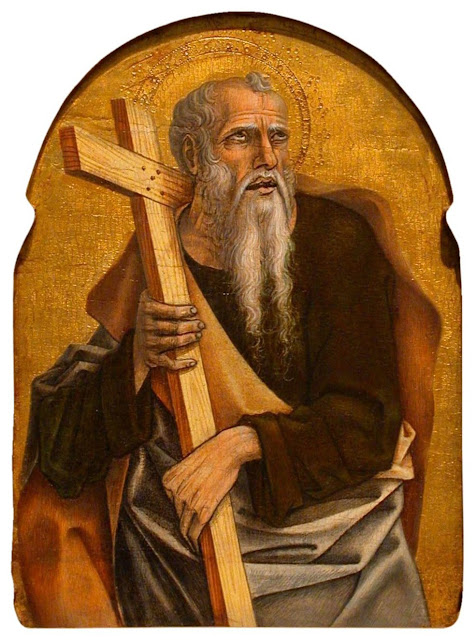 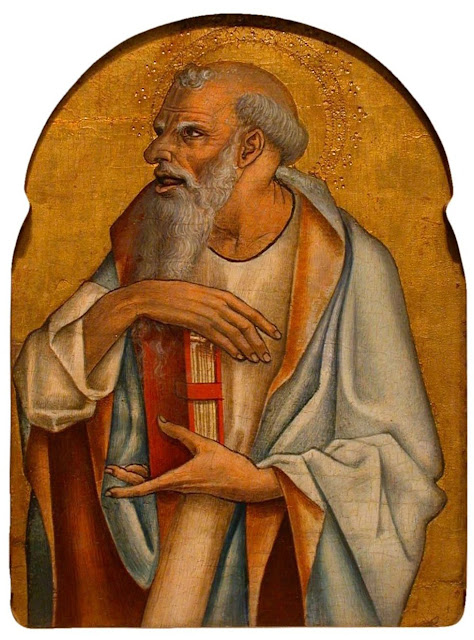