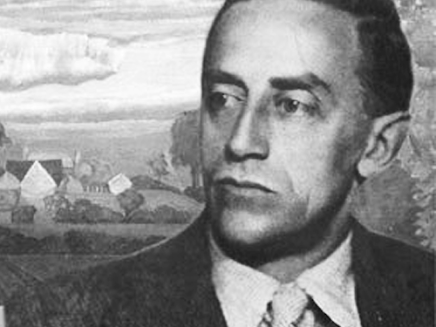 John Northcote Nash, the son of a barrister and younger brother of the war artist Paul Nash (a series on Paul Nash will follow) was born at Ghuznee Lodge, in Kensington, London in 1893. In 1901 his family returned to Buckinghamshire, where the garden of Wood Lane House at Iver Heath and the countryside of the Chiltern Hills greatly influenced him. Educated at Wellington College, John started work as a trainee journalist but his life changed when his brother, who had enrolled at the Slade, brought home two fellow students, Claughton Pellew and Dora Carrington, who inspired him to become an artist. Dora also introduced him to his future wife Christine Kuhlensthal (1895-1976), a talented artist who trained at the Slade with Paul Nash in the years immediately preceding World War One. They married in 1918.

John Nash did not receive any formal training, following his brother’s advice that it would ruin his unique vision of landscape. It would be unfair however to describe John Nash as an amateur artist especially after the notable success of his first exhibition in 1913 at the Dorien Leigh Gallery in Pelham Street in London.

During the First World War, in 1916, John Nash joined the ‘Artists Rifles’ before becoming an Official War Artist in 1918. From 1919 he then lived at Whiteleaf in Buckinghamshire where he became part of the renaissance of English book illustration. The drawings and engravings of this period especially reveal Nash’s knowledge of literature and botany as can be seen in his illustration of Poisonous Plants published in1927. During that period Nash also produced comic drawings inspired by Edward Lear, whose work he had seen in the home of his aunt Gussie, one of Lear’s girlfriends.

During the 1920s Nash taught at the Ruskin School of Art in Oxford and remained a teacher until the end of his life, inspiring many, including some of the best Kew artists. During most of the interwar years John Nash and his wife lived at Meadle in Buckinghamshire. From there both went on holidays all over England during which they filled numerous sketch books with pen, pencil and wash studies which developed into oil and watercolour compositions in their studio. Like Constable, Nash made annotations in these books about the weather on particular days.

Nash had a great passion for plants and his technique as a plant illustrator deserves special notice as he excelled in the field. He liked to use live specimen which sometimes was a problem when publishers asked for illustrations of plants which were not in season. He often used his garden, which was planted with a wide variety of plants such as roses, irises, gentians and hellebores. John Nash had always been interested in botany even as a child he had won a Botany Prize and, like his friend Cedric Morris, he called himself an ‘artist plantsman’.

In 1940 he was commissioned as an Official War Artist in the Royal Marines, a role he did not especially enjoy, preferring to paint the English landscape, which he did after the war. From 1922 Nash had made many visits to Essex and rented a summer cottage at Wormingford, near Colchester and in 1945 he and his wife bought Bottengoms Farm where they lived until they died. When in Essex Nash taught at Colchester Art School and conducted yearly plant illustration courses at Flatford Mill. As one of the founders of Colchester Art Society (and later the Society’s President) and through exhibitions of his own work, he became closely connected with the Minories Art Gallery. On his death he bequeathed his personal library and several of his paintings as well as the engravings recorded in this catalogue to the Gallery. Since then, the library, the paintings and most of the engravings were sold to the Tate.

Nash was made an ARA in 1940 and RA in 1951 and was appointed CBE in 1964. In 1967 he was given the first ever retrospective exhibition at the Royal Academy by a living painter. John Nash’s work can be found in many private and public collections such as the Tate Gallery, the Courtauld Institute of Art and the Fine Art Museums of San Francisco.

This is part 1 of a 4-part series on the works of John Nash: