Jackson Pollock (1912 – 1956) began to study painting in 1929 at the Art Students' League, New York, under the Regionalist painter Thomas Hart Benton. During the 1930s he worked in the manner of the Regionalists, being influenced also by the Mexican muralist painters (Orozco, Rivera, Siqueiros) and by certain aspects of Surrealism.
From 1938 to 1942 he worked for the Federal Art Project. By the mid 1940s he was painting in a completely abstract manner, and the ‘drip and splash’ style for which he is best known emerged with some abruptness in 1947.

In 1956 Pollock said: "My painting does not come from the easel. I prefer to tack the unstretched canvas to the hard wall or the floor. I need the resistance of a hard surface. On the floor I am more at ease. I feel nearer, more part of the painting, since this way I can walk around it, work from the four sides and literally be in the painting.

I continue to get further away from the usual painter's tools such as easel, palette, brushes, etc. I prefer sticks, trowels, knives and dripping fluid paint or a heavy impasto with sand, broken glass or other foreign matter added.

When I am in my painting, I'm not aware of what I'm doing. It is only after a sort of 'get acquainted' period that I see what I have been about. I have no fear of making changes, destroying the image, etc., because the painting has a life of its own. I try to let it come through. It is only when I lose contact with the painting that the result is a mess. Otherwise there is pure harmony, an easy give and take, and the painting comes out well.”

This manner of Action painting had in common with Surrealist theories of automatism that it was supposed by artists and critics alike to result in a direct expression or revelation of the unconscious moods of the artist. Pollock's name is also associated with the introduction of the All-over style of painting that avoids any points of emphasis or identifiable parts within the whole canvas and therefore abandons the traditional idea of composition in terms of relations among parts. The design of his painting had no relation to the shape or size of the canvas, indeed in the finished work the canvas was sometimes docked or trimmed to suit the image. All these characteristics were important for the new American painting that matured in the late 1940s and early 1950s.

During the 1950s Pollock continued to produce figurative or quasi-figurative black and white works and delicately modulated paintings in rich impasto as well as the paintings in the new all-over style. He was strongly supported by advanced critics, but was also subject to much abuse and sarcasm as the leader of a still little comprehended style; in 1956 Time magazine called him ‘Jack the Dripper’.
By the 1960s, however, he was generally recognized as the most important figure in the most important movement of the century in American painting, but a movement from which artists were already in reaction (Post-Painterly Abstraction).

His unhappy personal life (he was an alcoholic) and his premature death in a car crash in 1956 contributed to his legendary status. In 1944 Pollock married Lee Krasner (1911-84), who was an Abstract Expressionist painter of some distinction, although it was only after her husband's death that she received serious critical recognition.
In December 1956, he was given a memorial retrospective exhibition at the Museum of Modern Art in New York and a larger more comprehensive exhibition there in 1967. More recently, in 1998 and 1999, his work was honoured with large-scale retrospective exhibitions at MoMA and at Tate Britain in London.

In 2000, Pollock was the subject of an Academy Award winning film, Pollock, directed by and starring Ed Harris. 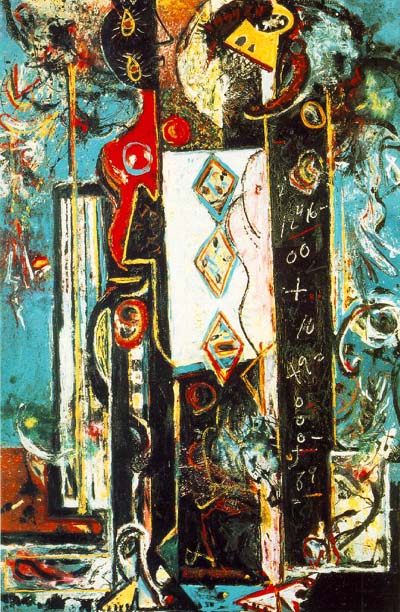 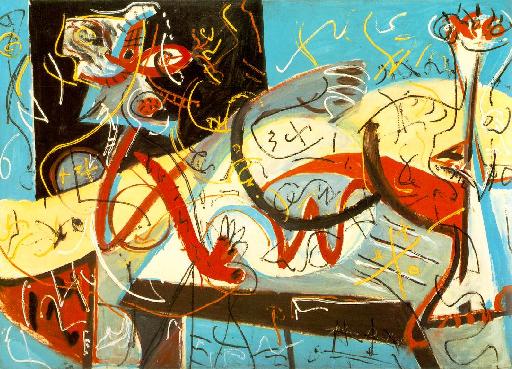 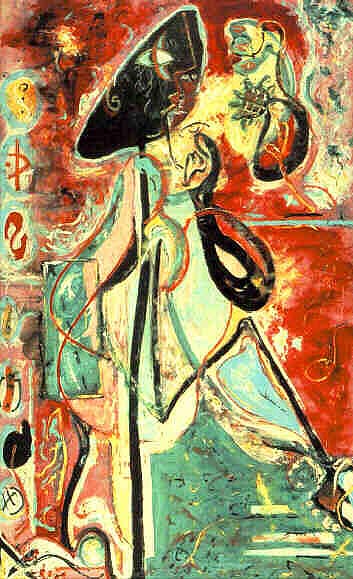 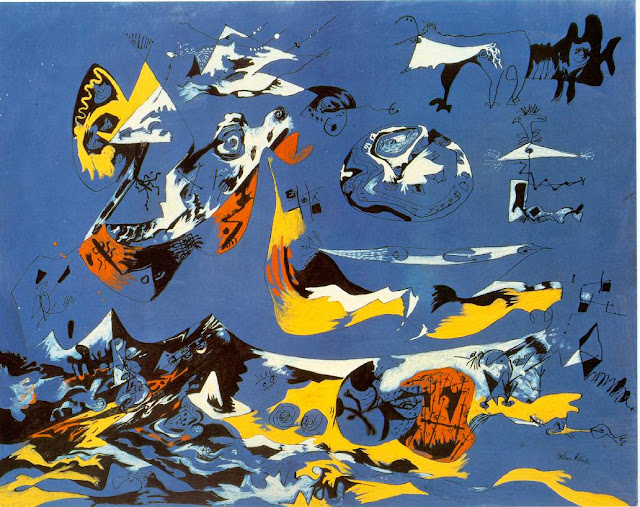 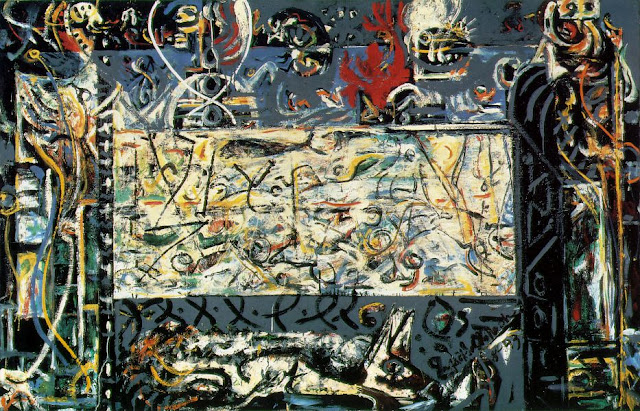 1943 Guardians of the Secret 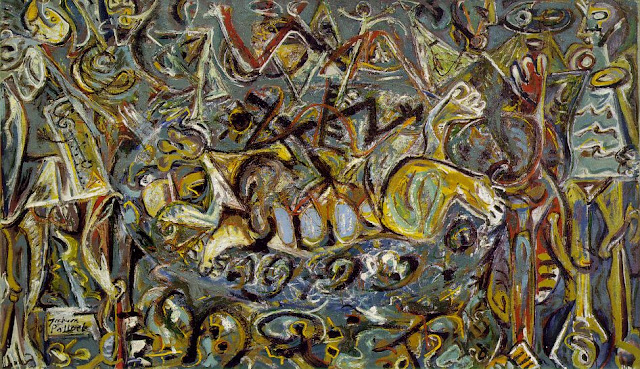 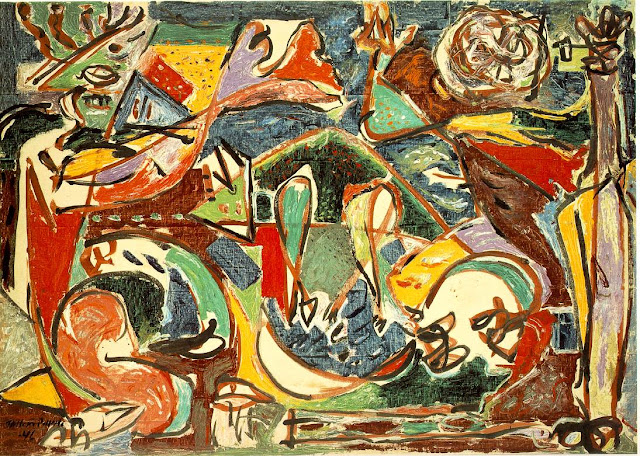 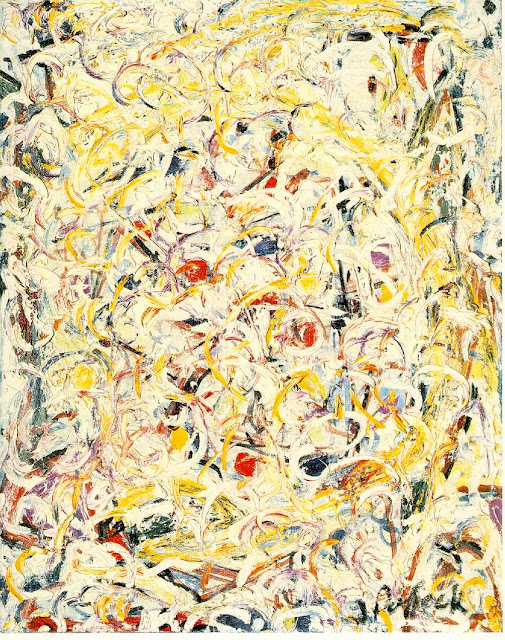 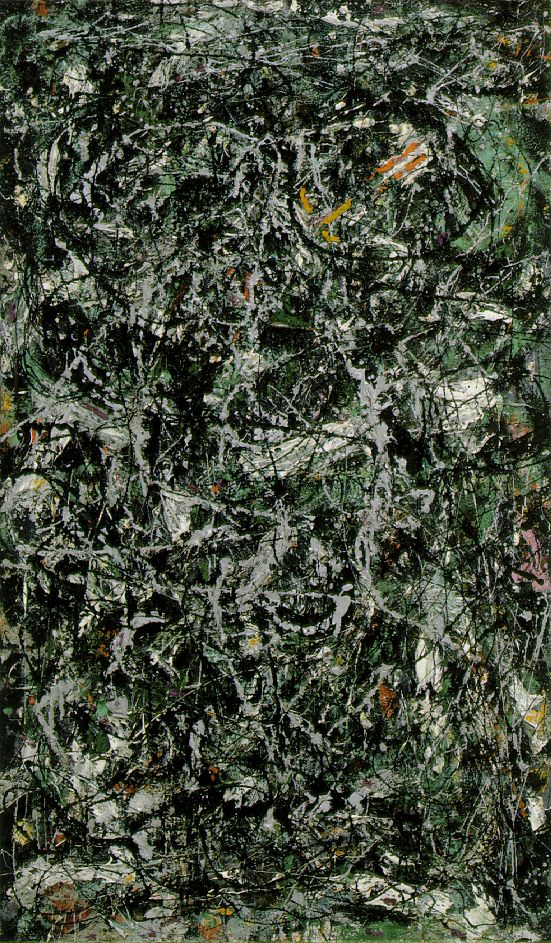 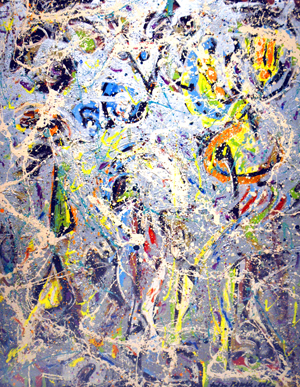 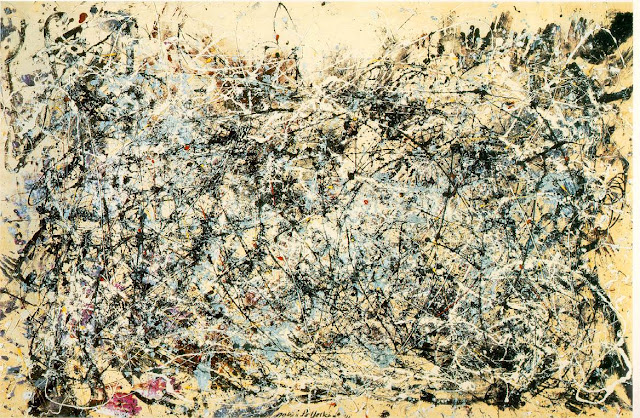 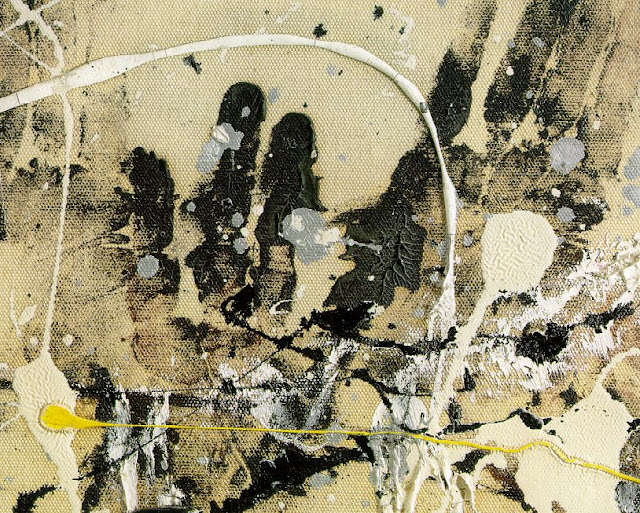 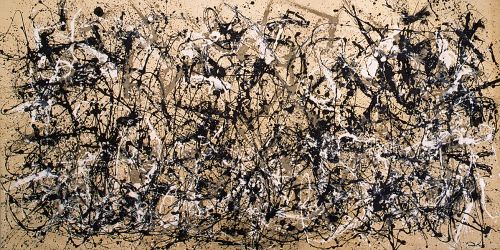 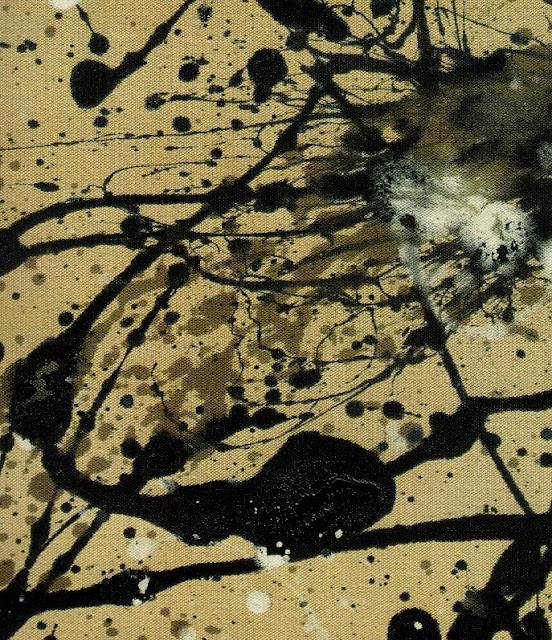 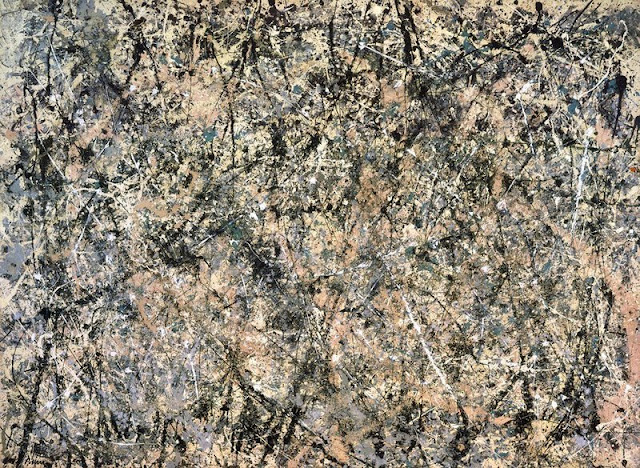 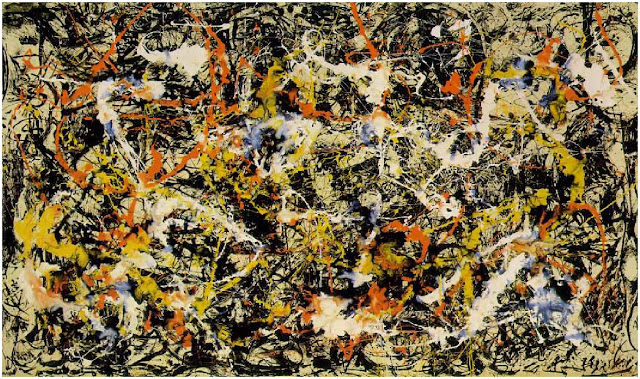 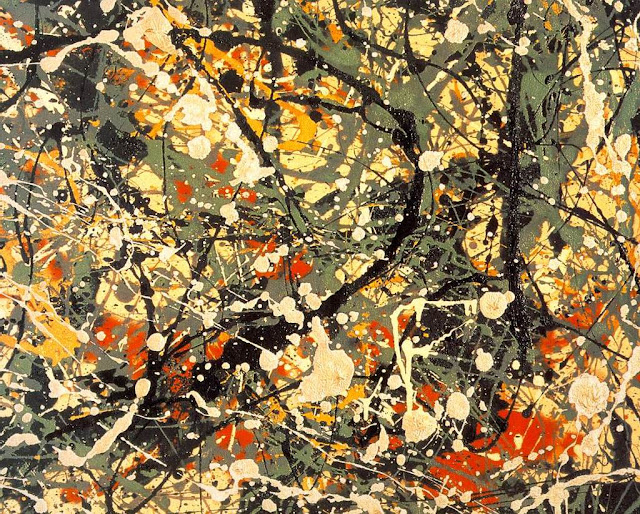 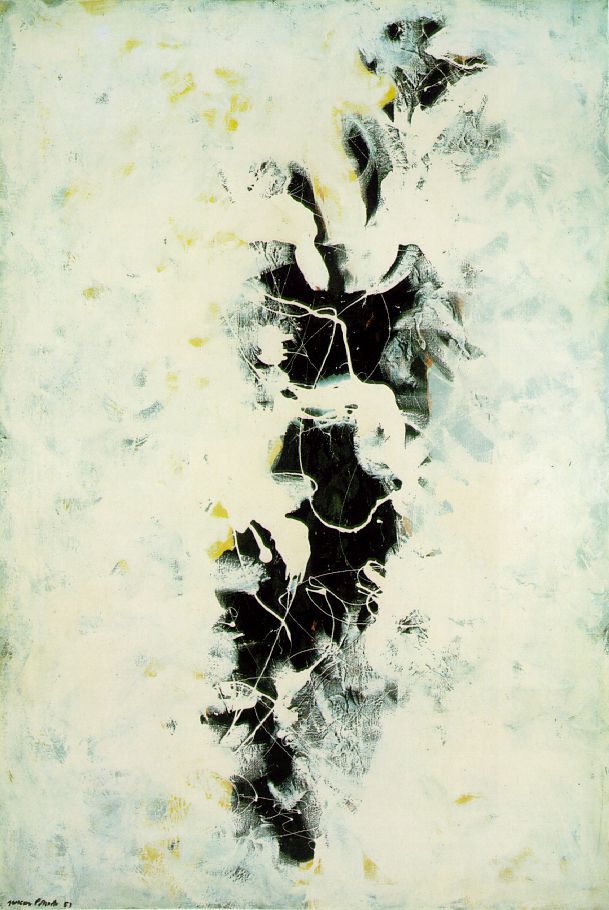 And finally, a painting by Norman Rockwell from 1962 called 'Connoisseur'. I'm not sure whether it is intended as an homage to Pollock or a kick on the shins. 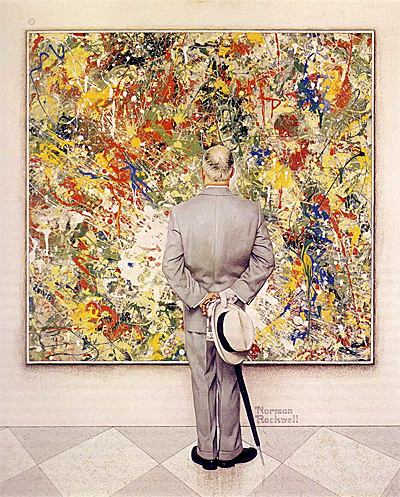